The more you purchase, the bigger discount you get. When you buy one package get 1% discount, each new parcel Sock Clip O-Ring is another additional 1% discount, and so up to 10% discount

Only now every purchase is promoted 10% discount. This is your discount forever. Ograniczona.Twój discount promotion for all is the only such a rebate system in the world. The more you purchase, the bigger discount you get for ever. When you buy one package get 5% discount, each bought another parcel Sock Clip O-Ring is an additional 5% discount, and so up to 40%. What rebate at the end have obtained such purchases have it forever
Colour

Clip O-ring - is produced for customers who value order with the socks. In an easily way it connects a pair of socks, which prevents the loss of one of them. Clip is multifunctional. We combine the dirty socks and we wash in the washing machine connected, dry them and store in a drawer. Clip does not fall in the wash and does not stain. It is made with 5% heat-shrink very durable material, with plenty of special rubber composition. Clip O-ring can be washed in the washing machine and in a washer-dryer. Sock Clip O-ring can withstand temperatures up to 95 ° C 200 ° F. Each pack contains 20 pieces of Sock Clip O-rings

Washing socks despite appearances, is not so simple. If you do not want to lose the socks, you should first and foremost join them in pairs. But often it is not that simple and it takes a lot of time. Moreover, such folded socks cannot be cleaned and can be separated during laundering. If you want to be sure that your socks did not get lost, you should use sock clips.

From today, the laundry is very easy!

Many people mix ther socks during washing. They cannot find them often to put socks together in pairs. An excellent idea to wash without problems is to buy a sock clip for washing. This ensures that your socks will be tense and even during the spin cycle in the washing machine will continue to be arranged in pairs. Such products as sock pins can be purchased at our online store. There are also products such as sock clips for laundry. These sock holders you can also use for socks drying. You do not need to put off special clips. You can hang the pairs of socks on a string washing. Sock rings are excellent products for each of us. By purchasing, for example, filter sock holders people can gain a lot more time and money and above all, socks will be in order.

Three simple words describe this invention. Clip O-RING can be attached to the socks right after removing them off your feet. This way, they are already paired before even putting them in the dirty laundry basket. Socks can be washed together with the clip which does not stain and does not fall off the socks. After drying them together they can be easily store away together as well. You take them off only before wearing the socks. Clip O-RING is durable and reusable.

Clip O-RING solves the common problem of "whose socks are these?" It comes in 12 colours which allows you to recognize your socks in a second.

What do you get buying O-RING?

TIME - You do not have to waste your time after every washing trying to pair your socks off.
MONEY - The washing machine does not ''eat'' your socks – you don’t have to buy a new pair of socks, each time you wash to replace the missing one.
ORDER - You put away the already paired socks inside the drawer without having to always search for the lost one. They are washed and dried in pairs!
HABIT - They are so easy to use that even children can use them and boring washing can be turned into a fun play of ‘matching colours’ for them.
OWNERSHIP – It gives a piece of mind because from now on nobody will take our socks. You mark them with different colours and recite the magical: "The Blue Is Mine!"

In 1598. William Lee received a patent from the cr & oacute;, Queen Elizabeth on the machine for the production of stockings and socks. From that moment it has increased considerably their production. And from that moment there was a problem dobieranai to a pair of socks after washing.

The problem pairing socks nutrował also the scientific community. One of the first definition, the phenomenon rozparowania socks as "the inability to find a pair of socks," sformułowałw 1879. German scholar Bundt

In 1927. Professor Linner conducted an experiment consists in tracing the fate of & oacute; in fourteen pairs of socks. In 1930. Was published in "Nature" sensecyjne results, allegedly phenomenon rozparowania socks did not exist. However, his assistant testified before the committee that Linner had wszytskie socks of the same color and czrnego in the JPIC & oacute; b podwazyłrezultaty his research.

In 2000. In the article "Skarpetowo" Gazeta Wyborcza rd Zagajewski said - "... as you want out of the washing machines have a set of socks, so that they were in pairs, the first pair you have to put them in the washing machine .. . "

Since the patent ... it 's been 410 years (1598-2008) and only now solved the eternal problem of pairing socks, podkolan & oacute; wek and stockings by the fact that arose SpinaczOring, kt & oacute; rice was invented in Poland. 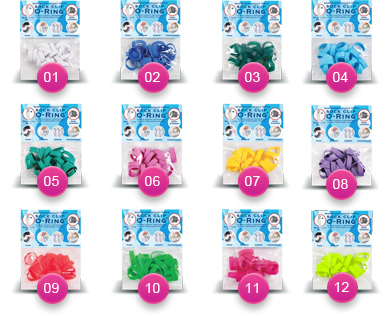 In order to improve the quality of services, department of business-to-business is undergoing renovation.
Feel free to use the temporary version of the site.

Product details
How does it work?
Why clip O-Ring?
Do you know that?
e-Shop
b2b
Contact Us